I wasn't able to find any detailed instructions for converting a piece of furniture into an aviary, so I thought I would write up my own discoveries after tackling this project. The fact is, it was a lot cheaper than building one from scratch and seemed a lot less daunting originally, but it still took a LOT of hard work. However, the end result is stunning and I couldn't be happier with it. 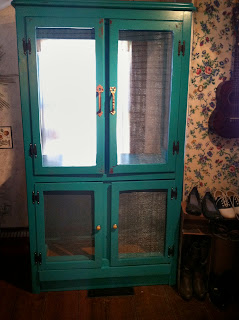 If you are thinking about doing this project, hopefully you have access to power tools and know how to use them, or have someone who can lend them to you or help you out. I did about 85-90% of this project myself, but there were some things I genuinely could not have done without help.

These are the tools I used, so you can get an idea of whether or not you could realistically complete a similar project:

For a simpler version of this project, you could probably get away without using the table saw or the bandsaw.


The first thing I did after coming up with this idea was to hop onto Craigslist and search for old TV cabinets. I was looking for something with these qualities:

Right size, (not too big to move upstairs, but not too small either- I wanted a lot of room for a bird to fly around in).
Real wood, (fake wood or a plastic-y material would have been a nightmare to work with).
Cheap.
Good condition.

I was fortunate enough to find a Mahogany TV armoire just 20 minutes away. It was listed for $50 but I offered him $35 and he accepted. I am now a huge fan of Craigslist.

I lugged the thing home, (I had to borrow my Dad's truck for this part), and got to work right away. Originally, it looked like this: 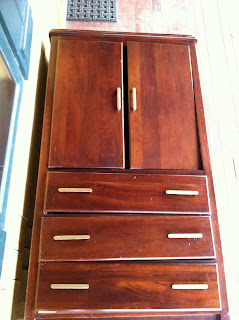 My plan was to cut out panels from the sides, front doors, and back, then fill them in with wire mesh. I would remove the drawers from the bottom section, except for the bottom one, which I ended up sawing in half and leaving as a pull-out tray. This complicated things a lot, and if I were to do this all over again I probably would have left the drawers in to store supplies and not messed with the bottom at all. But at the time I thought it would be simple, and I wanted the bottom section of my aviary to be a hedgehog apartment.

First thing I did was remove everything that wasn't necessary to the frame. This included some fancy sliders on the front doors, a lazy-susan type of device in the TV compartment, and some support beams on the sides. I stripped the whole thing down to its most basic shape.


After the big stripping spree, I moved on to cutting out the panels. Laying the cabinet down on its side, I marked out my rectangular panel with a tape measurer and pencil. Then I cut out the four corners using the circular drill bit. From there, I could put the jigsaw into the holes and cut down the lines. 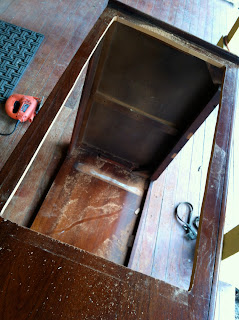 I would recommend clamping a guide board onto the edge of the cabinet to run the jigsaw against to keep a straight line. I didn't do this and my lines turned out super crooked. Thankfully my boyfriend brought over his hand plane and planed my cuts down until they were straight.

I did this on both sides, and on this insides of the front doors. I then sanded everything down. I now had the top part pretty much good to go, and I moved on to the bottom section.

Like I said, this was making things much more complicated for myself and I wouldn't recommend it for anyone who is ONLY interested in the aviary. But I was trying to kill two birds with one stone and turn this thing into a pet penthouse, (pethouse?) and I wanted the hedgehog cage on the bottom with a pull-out drawer for easy cleaning.

So I pulled out the drawers and sawed out the drawer dividers. I sawed the bottom drawer in half and put it back in. This is where things got tricky. There was a huge gap all around the drawer where a little
hedgehog could have easily fallen into and hurt himself or escaped. So I had to construct a frame around the drawer to fill in the gap, but after doing so I realized it prevented the drawer from being pulled out. A lot of screwing and unscrewing and measuring and crying from frustration took place. I got my construction worker father to help me figure this part out, and finally got it to work. But then I realized I had no doors for this bottom section. And cages need doors.

I did end up having enough scrap wood to be able to construct my own doors, but this was hard too. Especially because the wood kept snapping and I had to keep mending it with wood glue and clamps, only to have it snap again. Plus, my jigsaw lines were so awful that the doors didn't end up fitting together. So I used my Dad's table saw to get the edges super straight, and let's just say thank the Lord I still have ten fingers.

The next part was to sand the whole thing down and then paint it. I painted everything inside and outside a nice turqoisey- seafoam green that I just happened to have lying around. It's a Behr paint, which I've heard has less toxic fumes than other paints, so it would be harmful to the animals- although I'm still hoping they won't try nibbling on the wooden parts of their cage.

After the paint was dry, it was time to cut the wire mesh and staple it. This was horrible. My advice to you is: wear thick gloves while cutting and handling the wire, and get someone else to help you or it will be nearly impossible. The wire just wants to curl up and it will be terrible bowed and misshapen if you can't hold it down straight. Also, the staples did NOT want to go all the way in, so I ended up having to hammer them the rest of the way. I stapled this onto the OUTSIDE of the aviary on the sides and back, and my plan was to cover the rough edges with strips of thin wood, but I haven't done that yet and realistically I probably never will. 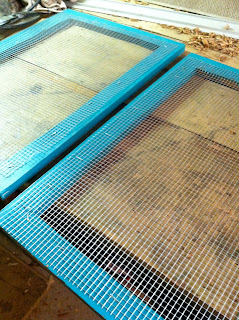 However, I stapled it to the INSIDE of the front doors so that it would look nice, but not wanting the little birdy to hurt himself on the sharp wire edges, I devised a clever plan to cover them up. I stapled strips of denim down the sides, which were folded up to create sort of a hem so that they won't fray. I still can't believe what a brilliant idea this was. 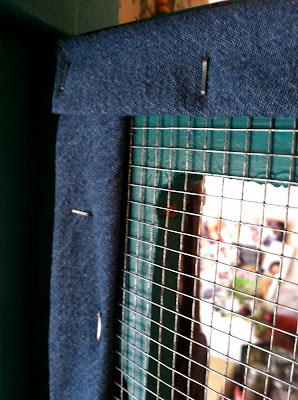 The last steps were to put on the door handles and hinges and attach the doors.
I also tiled the pull-out drawer to make it nice and mess-proof (wet wood is gross). We just happened to have leftover tiles so it worked out. However, I was terrible at cutting them so I ended up breaking one. I decided to use it anyway and break all of them to make it look like it was on purpose.

So then my aviary/ hedgehog cage was complete! The only thing left to do was put in perches. I found some natural pine branches from outside and washed them with warm water and some bleach. Pine is safe for birds, (so are a lot of other kinds of wood but I couldn't identify anything else! So to be on the safe side, I used Pine. Ha! You can just Google safe natural perches for a list if you're better at tree and branch identification).


The last issue I encountered was finding a way to keep the doors shut. I considered magnetic latches, but couldn't find any that would really work at the hardware store. I ended up opting for a really simple piece of screwed-in wood that would just pin the doors shut or turn to release them. 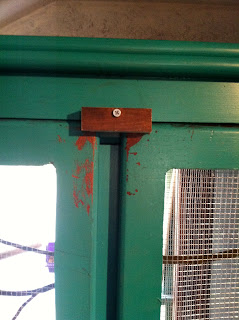 Also, you might notice the "distressed" look of the paint- this was not intentional, it just got banged up during the wire stapling process. But I do like the way it looks and ended up adding a little extra with sandpaper.

That's it! Hope this was helpful for anyone looking to create something similar for a pet. It really is a big effort, but it will end up looking much nicer than a big ugly cage in your home. It will be a pretty piece of furniture instead of an eyesore. Plus, it was cheaper and if you are into DIY it's definitely worth it. Good luck!